Augmentations are items you can add to existing items to improve them. Most items have a "Slot" in them where you can place an augmentation. Some items have more then one slot.

As of the patch of August 15, 2012, Augmentation Sealers are no longer needed. Augments can now be directly swapped in a piece of armor by clicking on an inserted augment with another augment on your cursor. Distiller requirements will still apply.

All augmentations can be added to or removed from items directly from the item window. You will need to have augmentation distillers or solvents in your inventory to remove those augments that require them.

Alerynril the Loyal in the Plane of Knowledge (near the Crescent Reach stone) sells Perfected Augmentation Distillers for 432 crowns (loyalty tokens). These are reported to allow you to safely remove any augmentation, including those that state they can only be destroyed.

She does not offer them to some people unless they uncheck the "Show only items I can use" box.

These augmentations will go in a Charm item.

They are scattered in various areas of Norrath and look like a bird bath. They no longer serve any purpose but this section is left for historical reasons. 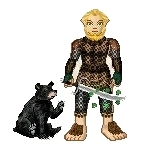