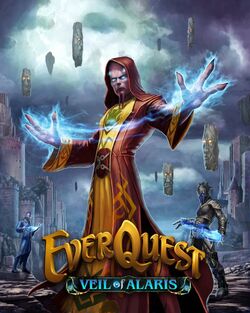 Zones in Veil of Alaris have very little restriction. Players can basically go wherever they choose in the expansion. There is no need to "unlock" a tier to enter it. 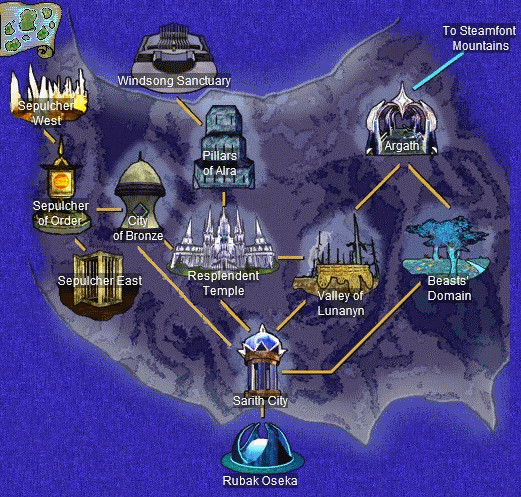 There are essentially three types of advancement: Content, Spells and AAs.

Task and Mission content progression will be very similar to past expansions. Missions are part of a series of tasks which will have to be done in order to request the tasks and missions. However, we will also be requiring some level of understanding of the Alaran language to get some of the content. You gain skill with that language by doing the content anyway, so in practice there isn't much of a change here.

There will be some lists and charts coming later. The main thing to understand here is that as you do the quests you will learn the language that you need to access the next tier of content.

In Argath and Valley of Lunanyn, each task gives a different book, each with its own bit of story. Each zone after that will give the same book for every task. Clicking any of these books will set your language skill to the proper value based on the tasks you have completed. Here are the language skill calculations:

Note: You get points for completing a task once. Repeating those tasks will not improve your language skill.

The first time you complete any VoA raid, a book will appear in your inventory: It is called the Record of Tales, and it is where you will record your raid accomplishments. You must keep this book with you throughout progression. If you don't use your book after every raid, you will not get progression credit for it.

When you use this book in other locations or situations, it will inform you about what raids you have defeated, what tiers you have access to, and what, if any, tiers you have completed all events in.

When you complete a raid, equip and use the Record of Tales. It will tell you of your accomplishments, and if you have just defeated a raid, it will gain experience and record your deeds for later. You have 30 minutes following a raid victory to use your book, and the zone will send you a reminder every minute if you are eligible to gain experience but have not done so yet. Only 54 people can gain experience for a raid, and you must have participated in the raid to get experience.

When you have defeated a certain number of raids, your book will evolve. When it does so, you have access to enter the next tier of raid zones. You do not have to defeat all the raids in a tier for access, just enough raids to make your book evolve. Once your book has evolved to the final form, the Record of Legends, you have access to all raid zones and you no longer need to carry your book with you. You can still use it to check to see what individual raids you've completed and to grant your 'completion' flags when you have defeated all the raids in a tier.

Here are the number of raids you will need to defeat in order to make your book evolve to the next tier:

Here is a partial list of things you do NOT need to enter a raid (again, see the requirements for requesting them below):

If you're not requesting the raid, you just need your book to have evolved to the right level to get in.

The 85/15 rule applies to all VoA raid zones. If you are part of a raid force that defeats a raid in a tier that you don't have access to, your book will gain more experience than normal. One tier ahead will double the experience. Two or more tiers ahead will triple it. This system is designed to speed up the process of backflagging without allowing someone guesting with a T4-capable guild to get one backflag item and cut out the entire flagging process.

Your book will not gain experience for defeating raids that are below the tier you are flagged for.

In order to request a raid for a zone, you must meet the following criteria:

Each individual raid-giver has his/her/its own requirements, so I can't list them all here.

Rank I Spells have the following Alaran language requirements:

Rank I spells are obtained by the spell vendors near the Argath zone in.

Rank II spells are obtained by turning in "Alaran Cantrip" items to The Sklyg in Beasts' Domain. These Cantrips commonly drop in all Veil of Alaris zones. Each named drops 1 Cantrip, and they can drop from trash as well. Chest rewards from missions also drop a single Cantrip.

Rank III spells are obtained by turning in "Alaran Periapt" items to The Sklyg in Beasts' Domain. These fragments drop from chest rewards for VoA raids.

Quest rewards for spells that you already have scribed should be hidden from you. This does not check for scrolls you have in your inventory! It also does not check Disciplines.

Each quest should always offer you a return of your item (in case you don't have a viable option). In addition, you now have the option (at least for Rank II, Rank III has not been confirmed) to trade your Cantrip for a lower level Cantrip.

All type 3 focus augs are from The Interceptors (Jayt Steed, Jheron Welson, Rocher Hampstin) in Beasts' Domain near The Sklyg. They cost about 15,000 platinum each and require 71 Alaran language skill to buy.

Shadowknights, Shaman, Necros, and Beastlords may then combine their wrist armor inside the Reliquary of Refinement to change the focus on it.

The Veil of Alaris expansion introduced three new alternate currency types. These are obtained by being present during a raid win. They can be used to purchase raid loot items.

These are earned by all participants of tier 2 raids. Plain Unadorned Armor can be bought from the tier 2 raid vendor, Riallion Cassand in Sarith, City of Tides, for 6 Rebellion Chits.

These are earned by all participants of tier 3 raids. Detailed Unadorned Armor can be bought from the tier 3 raid vendor, Olgor the Finder in The Resplendent Temple, for 12 Diamond Coins.

These are earned by all participants of tier 4 raids. Sophisticated Unadorned Armor can be bought from the tier 4 raid vendor, Sholano in Erillion, the City of Bronze, for 50 Bronze Fiats each.

The Gnomes are about to commence work on their greatest project ever! Join them Saturday, October 1 through Sunday [sic, recte Monday], November 14, 2011.

Deep in the valleys of the Steamfont Mountains the Gnomes are preparing perhaps their most ambitious endeavor to date, the construction of a massive airship. Does this have anything to do with the Emissary of Brell? Where do the Gnomes plan to travel? Has the King of Ak'Anon contrived some plan of his own? Journey to the land of the Gnomes and investigate their enterprise. Perhaps you could lend a hand, as the gnomish people have been known on occasion to be generous to those who assist them.

Go forth and find the answer to this gnomish enigma! Seek the Chief Engineers for revelations on the future of Norrath!

The pre-launch quests Baga's Stand (no longer in game) and Engine Trouble (Group Mission) have An Ancient Text as the reward. Engine Trouble only gives out one in the chest upon completion.

This is being kept here for historical purposes.

Lore: from another plane of existence where gods gained power through worship and Alarans could ascend to godhood

Discord drove the Alarans from their plane to Norrath during the Age of Scale. The Alaran gods sacrificed themselves to move the Alarans to a continent on Norrath. Final god sacrificed itself to raise the "veil" around continent. Continent is on the globe in Skyfire.

On September 22, 2011, SOE had a webcast which announced several features planned for VoA:

Of course, everything is subject to change as they continue development of VoA.

Community content is available under CC-BY-SA unless otherwise noted.
Advertisement